Nature knows no straight lines. All movements follow spiral curves and uniform courses, on a cosmic scale such as planetary movement. As well in the micro-cosmos like in the movement of a flowers growth. Water loses its quality of life when it is directed through a straight pipe under pressure or in a storage vessel that is square shape, where it unable to move due to the corners. It becomes stale, no longer refreshing, and no longer able to cleanse itself. As soon as it can flow freely again, it makes whirlpools and meanders. Everyone has had the chance to see the whirlpool in the bathtub, which is equally created by this inner impetus.
In every naturally flowing stream, it is easy to see that the water cools itself down on stone after this whirlpooling action. The popular European saying goes: “Water is clean again after it has flowed over seven stones.”
Walter Schauberger found, while studying the form of whirlpool funnels, a simple mathematical law, after which he manufactured this funnel. This hyperbolic form permits water to become full of life once again. It returns the vigor with rebuilding and invigorating energies like that of a natural stream. 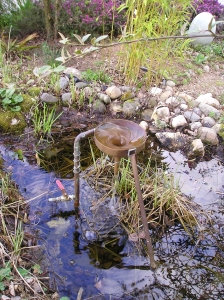 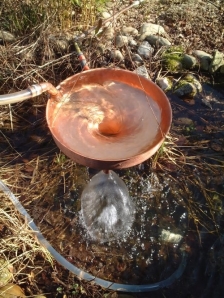 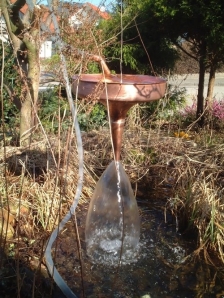 The natural whirlpool movement gives water its original powers and returns its ability to clean its self. Moreover, harmful substances break down in the water as atmospheric oxygen and carbonic acid is absorbed easily to the water with this whirlpooling action.

Observations
• Green and string algae are reduced to a natural amount
• Clouding of water due to brown algae is reduced
• The oxygen supply for fish improves dramatically
• Irrigation: plants need approximately 30% less water and 40% less feeding

Installation
Hyperbolic cone fountains can be suspended over a body of water or permanently mounted with legs to the body of the cone. Also floating installations are an option. It can be fed by a submersible pump which can run from a solar electric supply. During installation, it is important to ensure that there is sufficient space between the mouth of the funnel and the surface of the water, so that a well-formed bell of water is discharged from the outflow of the funnel. The combination of a spiral pipe on the inflow to cone further increase the effectiveness of energization. Hyperbolic cone fountains have proven themselves extremely effective on toxic golf course ponds in Germany. In a short period of 2 months out of control algae blooms receded leaving the pond clear and lively, inviting for bird and aquatic life to flourish!
Prices available upon request nevin@truestspring.com Four different sizes are available 205mm 335mm 415mm 540 mm

Based on ideas by Viktor Schauberger regarding water as a “living substance”, the Zell a. H. team, in collaboration with Erich Neumann has developed a simple and easy way to enhance the quality of Water. Installation of these pipes just before the exit point of the water in existing plumbing, such as a faucet or shower head. This pipe is gradually formed by a process in which a machine makes a series of indentations in the form of a spiral down the length of a pipe. Inside the pipe a scale-like surface is created to support the rhythmic flow of the water. In this way the water is directed to fold into itself allowing suction forces and whirling to occur. An outstanding energetic effectiveness is produced by the pipes on the water. The pipes are tested randomly by the manufacturer to a point of 10 bars of pressure.

Spiral pipes are available in 1/2 and one meter lengths, also one meter pipe fitted as a watering wand.

Email nevin@truestspring.com for information or to place an order 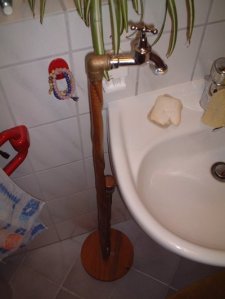 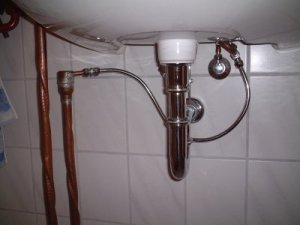